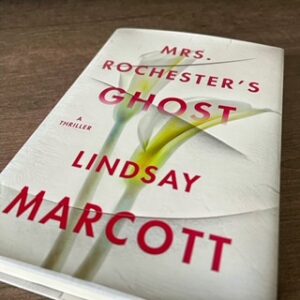 In a modern and twisty retelling of Jane Eyre, a young woman must question everything she thinks she knows about love, loyalty, and murder.

Jane has lost everything: job, mother, relationship, even her home. A friend calls to offer an unusual deal, a cottage above the crashing surf of Big Sur on the estate of his employer, Evan Rochester. In return, Jane will tutor his teenage daughter. She accepts.

But nothing is quite as it seems at the Rochester estate. Though he’s been accused of murdering his glamorous and troubled wife, Evan Rochester insists she drowned herself. Jane is skeptical, but she still finds herself falling for the brilliant and secretive entrepreneur and growing close to his daughter.

And yet her deepening feelings for Evan can’t disguise dark suspicions aroused when a ghostly presence repeatedly appears in the night’s mist and fog. Jane embarks on an intense search for answers and uncovers evidence that soon puts Evan’s innocence into question. She’s determined to discover what really happened that fateful night, but what will the truth cost her?

I always knew I wanted to be a writer and began by free-lancing articles to Harpers, Rolling Stone, Vogue, and Working Woman. My first novel, written under Lindsay Maracotta, was the thriller Hide and Seek. This was followed by the national bestselling Everything We Wanted. h and Australian Doubleday Book Club selection and translated into four languages.

After moving to Los Angeles and working among the beautiful, the bad, and the ugly of Hollywood, I wrote the critically acclaimed “Dead Is The New Fabulous” mystery series, twice a Sisters in Crime Best Book and made numerous Ten Best Mystery lists. It was great fun to co-produce a film based on the series for the Hallmark Channel.

I’m currently living in Los Angeles with my husband, a feature film producer, and my two cats, Clancy and Gatto, who are always ready for their close-ups.

Every time we read a retelling; we go into it expecting the same story – Just told to us in a unique way. Lindsay Marcott did a wonderful job sticking to the storyline, the same basic events, names, and places were all there and modernized. She imagined some different scenarios that player out well. And I really did enjoy this foray into a beloved classic. But the thing about retellings I am learning is that we tend to compare them to the original and find them lacking in some way because THEY AREN’T THE ORIGINAL. So now that I have said that this retelling was remarkably well done and if you have never read the original, I think most of us would love it for itself.

I loved that Lindsay Marcott gave me a glimpse at what the story would resemble in today’s world, with all the mystery, drama, and scandal I loved about the original story intact. I rate this book at 3.5 stars rounded up to 4.

**This book does contain elements that are not clean fiction.