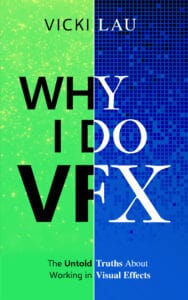 From the city of Singapore to working on over twenty Hollywood blockbuster films and TV series such as “The Walking Dead,” “Guardians of the Galaxy,” “Aquaman,” and “War for the Planet of the Apes,” comes one of the first books of its kind in the visual effects (VFX) industry.

With a unique blend of self-help, career strategy, and memoir-like elements, Vicki Lau speaks to the core of what it is like to work behind-the-scenes on some of your favorite Hollywood titles, covering strategies employed in order to maneuver her way into the upper echelons of the industry.

You will learn: Why I Do VFX is a must-have for anyone seriously considering a fulfilling life and career in Hollywood, film, and the arts.

After all, why spend a decade of your life uncovering the truths about this industry when you need only read this book to answer your own question:

Do you really want to do VFX? 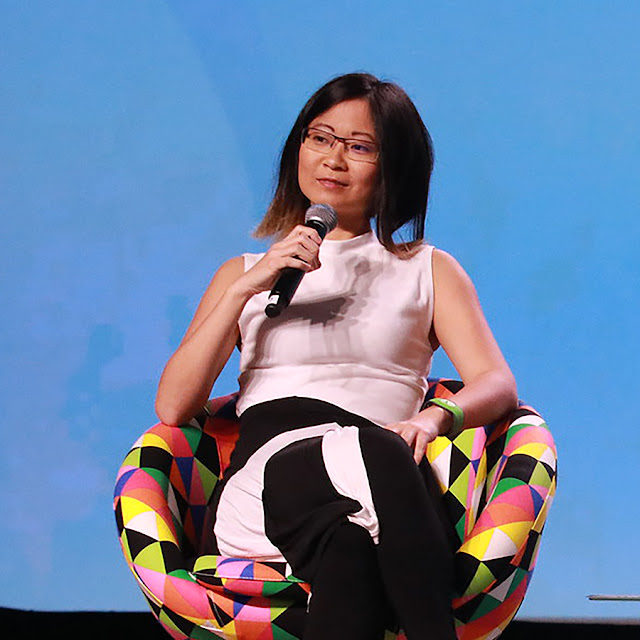 Vicki Lau is a VFX artist/generalist, virtual reality (VR) developer, TEDx speaker, entrepreneur, and educator from Singapore who broke into Hollywood as an outsider. She has worked with over 20 studios and filmmakers on major productions such as AMC’s “The Walking Dead” (Season 4), “Guardians of the Galaxy,” and “Aquaman” and teaches over 80,000 students worldwide.
She is a winner of the WeAreTheCity Rising Stars Editor’s Choice Award and nominated finalist of the WeAreTheCity Rising Stars Global Award for Achievement and WinTrade Award for Women in Tech. Vicki is also a bodybuilder.
Connect with the Author:  Website ~ Instagram ~ Goodreads

Where do you get inspiration for your stories?

All of the stories highlighted in my book are true accounts, observations or tales told by colleagues, peers and people I’ve worked with in the industry and in Hollywood. If you read the book, you’ll certainly find a huge variety and flavor of stories. You’d be surprised (or probably not) by the different kinds of people you’ll meet in Hollywood – and, usually, such personalities come with lots of colorful true stories.

As a woman in this male-dominated field, you’ll find that I’ve also got that angle of stories covered. Let’s just say, it does get pretty interesting in certain chapters of the book.

Is there a specific ritualistic thing you do during your writing time?

What is the most difficult part about writing for you?

Probably being pulled away from my writing by other miscellaneous tasks or events happening. For example, I was one time competing at a natural bodybuilding competition for fun and that took out a significant chunk of time from my writing. Attending awards ceremonies also occupy a significant chunk of time out of my writing. Yes, so pretty much anything that could draw me away temporarily from writing makes it difficult – you want to sit there for hours and write but can’t when there’s this thing you need to tend to or there’s this event coming up that requires your attendance, et cetera. Other than that, I find that writing comes naturally to me.

I see that you also have an audiobook for this book. What are the challenges in producing an audiobook?

Well, for one, it adds to your publishing or book launch timeline significantly. This was something I had underestimated when deciding to produce an audiobook for this title. Thankfully, I had on board a very patient and very on-task narrator (Madison Bishop) who ended up taking on the reins of the entire audiobook production – from narration to editing. For me, one of the biggest challenges I had encountered during the audiobook production was how much time I had to spend to review chapters and lengthy audio files (some of them over an hour long per piece). The audiobook, being initially over 11 hours long, had to be reviewed by myself multiple times (whenever an edit was made or mistakes were caught, to assess tone and pacing, et cetera) – add to that my VFX tendencies of being extremely detail-oriented and you have a project that could potentially take ten million months to complete. Heck, I had estimated that it took me an average of about 8 to 10 hours to review an hour-long audio file. Since we had about 3 rounds of edits, the estimated time I had spent in total (just to review audio files, make detailed notes, et cetera) were, well, over 320 hours.

Thankfully, it didn’t take ten million months as I was very firm on getting it out as soon as possible (even with this in mind however, we definitely did not compromise on quality either). Ultimately, after a long journey and countless of hours sitting still and listening/reviewing in detail, the audiobook was completed according to plan – and is now out on Audible and other audiobook platforms.

It was a lengthy and tedious process but thoroughly worth it in the end. I highly recommend checking it out – Audible is currently giving out free trials so technically it would cost you nothing.

Even if VFX is not your thing, Madison is really entertaining to listen to and very good at embodying the different characters in the audiobook – she’d be a talent I’d watch.

Jackson Hole, Wyoming – the atmosphere was simply magnificent, spiritual and cosmic. Though I have a feeling I would probably enjoy the whole of Wyoming once I get to explore the other areas and towns of the beautiful state.

If you were stuck on a deserted island, which 3 books would you want with you?

This might sound funny but I’d probably bring my own authored books with me, haha. Yes, I only have 1 today but by the time I imagine I would be on a deserted island, I’d have 3. At least I can finally write in peace on that deserted island … There may even be more than 3 books by the time I’m done being stuck on the island.

Visit other stops on this tour to learn more about Vicki Lau: