Welcome to the Blog Tour & Giveaway for Quest of Fire: Shadows at Nightfall by Brett Armstrong, hosted by JustRead Publicity Tours! 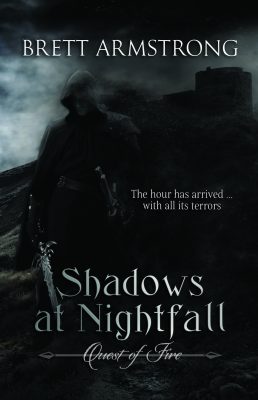 The shadows of Jason’s past have caught him. Having stepped into the Quest of Fire, Jason is pursued by a league of assassins formed of pure darkness. To his horror he discovers these creatures also were contracted to eliminate Anargen and his friends as they sought to understand the Tower of Light’s oracle. To unravel the mystery of who wants him dead and how he fits into the ages old quest, Jason must travel the lengths of the Lowlands. In the Ziljafu deserts a secret awaits him that will shake him to his core. He’ll have to move fast and cling fiercely to hope, as Anargen’s story twists down a bleak path to almost certain failure.

The creatures of darkness in the Lowlands have long waited for men to spurn the High King’s laws. With few concerned for the light and everything falling apart around them, Jason and Anargen will face the shadows of night’s falling as their world hangs in the balance.
PURCHASE LINKS*: Goodreads | Amazon | Barnes & Noble | Book Depository | IndieBound | BookBub Brett Armstrong has been exploring other worlds as a writer since age nine. Years later, he still writes, but now invites others along on his excursions. He’s shown readers haunting, deep historical fiction (Destitutio Quod Remissio), scary-real dystopian sci-fi (Day Moon and Veiled Sun), and dark, sweeping epic fantasy (Quest of Fire). Every story is a journey of discovery and an attempt to be a brush in the Master Artist’s hand. Through dark, despair, light, joy, and everything in between, the end is always meant to leave his fellow literary explorers with wonder and hope. Always busy with a new story, he also enjoys drawing, gardening, and spending time with his wife and son.

How you craft your stories? Walk us through your process; Story boards, Pinterest characters, detailed notes, outlines…etc.

Every story I write of course starts with a basic idea, either a question or observation or interesting fact I’ve heard. But the story doesn’t come to life for me till I can imagine a scene that grips me. In my first novel, it was of a man who had come on his house burning. The setting is sharply defined with a slate grey clouded sky above and swaying tall grasses that have browned. There’s a stone road that runs past the house. Questions followed: Who is he? Where is he? Why is his home burning and why wasn’t he there when the fire started? Did he lose anyone in the fire? The more compelling that first scene is for me and the questions that comes with it, the greater the chance that I’ll investigate further.

For me writing is like taking a hike through the mountains. When I get to the top of that first peak (the first clear scene) I start to get an idea of where this particular trail leads. I can see other key story beats stretching out to the conclusion like the ridges of the mountains. From that vantage I can tell whether or not I want to explore further and learn more about this story world and the characters who live in it. So I set off further onto the trail and I go down the slope of the scene which gripped me so fiercely and I start navigate the valleys filled with rivers, forests, and glades. Those are the intricate details and surprise twists and turns the plot can take and characters can introduce as they develop or are introduced.

From the top level I couldn’t see exactly what was right ahead, though I could guess some things from where I had to go to get to the next major beat of the story. In that respect I suppose I’m what’s called a pantser (a writer who doesn’t plan things out for those wondering, you know holding onto the story by the seat of your pants), but since I have an idea where I’m going I suppose I’m a purposeful pantser. I draw sketches to get ideas of what characters and locations look like. I go over the mental picture in my head from different angles to find the best view and mentally run through the dialogue for scenes while doing things like brushing my teeth at night or waiting at stoplights. If I strike on a really solid bit of dialogue or quirk to the story, at first chance I write it down.

I don’t always get to write it down while it’s fresh but my thought is that the Lord allows me to have my epiphanies in moments when He knows I can’t record them right away, so I trust that by the time I can it will look as much like He intended it to as possible. My goal is to be a brush in the Master Artist’s hand and I know I’m a flawed instrument. Which makes me all the more grateful to be used.

Often times for big, complex stories like my most recent, Shadows at Nightfall, I’ll redo scenes multiple times till I feel like I’ve captured the best paths to the story ridges I visited. That way I can take readers with me through that story world and hopefully show them the very best sights and sites along the way. My hope is that the journey stays with readers long after they’ve left the story trail I’ve shared with them.

(2) winners will receive a $10 Amazon gift card, print copy of Shadows at Nightfall, and Quest of Fire digital exclusives (map, theme music, and digital making of the direnoir poster)! 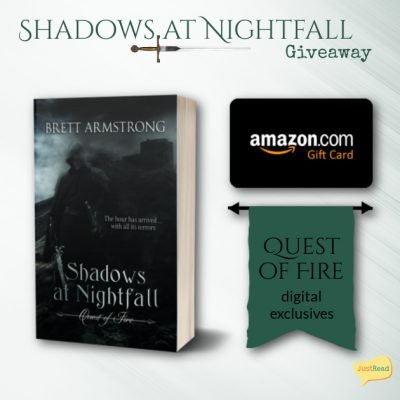 Be sure to check out each stop on the tour for more chances to win. Full tour schedule linked below. Giveaway will begin at midnight September 20, 2021 and last through 11:59 PM EST on September 27, 2021. Winner will be notified within 2 weeks of close of the giveaway and given 48 hours to respond or risk forfeiture of prize. US only. Void where prohibited by law or logistics.

Quiet, Quirky, and a Lover of Adventure both indoor's and out.
Articles: 193