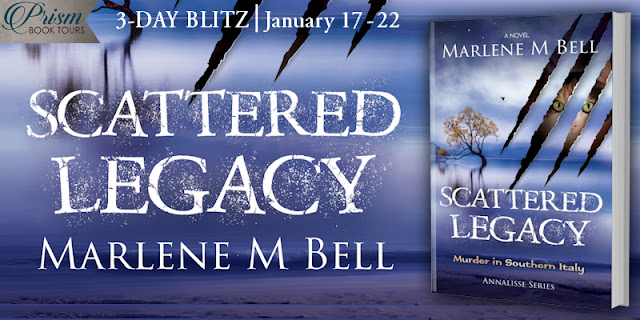 On Tour with Prism Book Tours
We’re celebrating the release of the third book in the Annalisse series, Scattered Legacy! Today, author Marlene M Bell shares an excerpt from the book. If you missed her author interview, you can read that HERE. Next, we learn the author’s Top Ten activities for winter. Plus, there’s an awesome 3-winner giveaway to enter below. Enjoy! 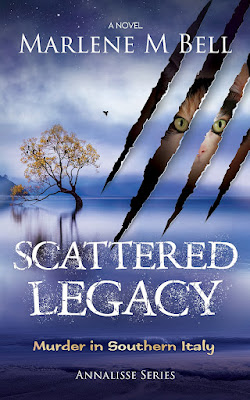 When Alec schedules an overseas trip to show Annalisse his mother’s birthplace in Bari, Italy, he squeezes in the high-stakes business of divesting his family’s international corporation. But things go terribly wrong as murder makes its familiar reappearance in their lives – and this time it’s Alec’s disgraced former CFO who’s the main suspect.

Accompanied by friend and detective Bill Drake, Annalisse and Alec find themselves embroiled in a behind-closed-doors conspiracy that threatens the reputation and legacy of Alec’s late father – linking him to embezzlement, extortion, and the dirty business of the Sicilian Mafia. The search for the truth sends the trio straight into riddles, secrets, and an historic set of rosary beads. Annalisse leads Alec toward a discovery that is unthinkable, and events that will change their futures forever. 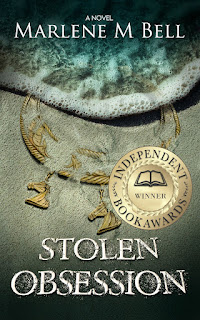 People die, but legends live on.

New York antiquities appraiser Annalisse Drury recently lost her best friend to murder. The killer’s identity may be linked to her friend’s expensive missing bracelet—a 500-year-old artifact that carries an ancient curse, one that unleashes evil upon any who dare wear the jewelry created for the Persian royal family.

Weeks later, Annalisse sees a matching necklace at a Manhattan gallery opening. She begs the owner to destroy the cursed piece, but her pleas fall on deaf ears—despite the unnatural death that occurs during the opening. With two victims linked to the jewelry, Annalisse is certain she must act.

Desperate, Annalisse enlists the gallery owner’s son to help—even though she’s afraid he’ll break her heart. Wealthy and devastatingly handsome, with a string of bereft women in his wake, Greek playboy Alec Zavos dismisses Annalisse’s concerns—until his parents are ripped from the Zavos family yacht during their ocean voyage near Crete.

Annalisse and Alec race across two oceans to save his mother, feared dead or kidnapped. When the killer changes tactics and goes after Alec behind Annalisse’s back, can her plan to rescue Alec’s mother save them all? 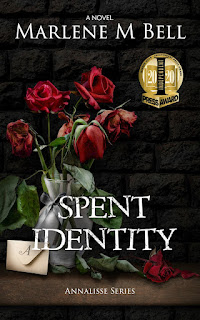 (Annalissa Series #2)
By Marlene M Bell
Mystery
Paperback, Audiobook & ebook, 378 Pages
November 18, 2019 by Ewephoric Publishing
To find her missing aunt, she has to unearth the secrets of the past. But lies and deceit run through the very heart of their town…

What started out as a promising relationship with adventurer and tycoon Alec Zavos has fizzled into an uncertain future for antiquities expert Annalisse Drury. Returning to Walker Farm in Upstate New York to see her Aunt Kate should have been a welcome homecoming and distraction. Instead, she finds the childhood home she expected to inherit is for sale, without her permission. What’s worse, Kate’s ranch manager makes a gruesome discovery in the barn: the body of a man, dead by foul play.

Annalisse turns to Alec for help. She and her aunt shelter on his estate in the Catskills while the authorities canvass the scene. But when Kate herself disappears without a trace, Annalisse fears the worst: that one of the many secrets of her hometown has ensnared her family—a secret someone is willing to kill for to keep hidden.

(Affiliate links included.)
Goodreads | Amazon | Barnes & Noble | Book Depository
Excerpt
The reception area is completely empty, and there’s a smell like metal in damp dirt circulating overhead. Farther in, the ceiling fan is hovering on high speed, and the windows are open.

A dead body inside a warm office leaves an unmistakable odor behind, as did the body Ethan found inside the stall at Walker Farm. Decomp is one smell that sticks with you forever. Adding to the office creepiness, who chose the interior’s decor? We’re surrounded by limestone walls painted an ugly shade of ochre, slightly more yellow and definitely more unappealing than the building’s exterior. The rooms will need another coat of fresh paint to cover a harsh stench known to stick to the walls like cigarette tar does.

No one is nearby, not even the receptionist.

The office cubicles are silent but for a few flapping papers. Not a single desk phone is ringing. It’s like the office decided to have a fire drill midday, and the employees left their computers on and didn’t bother to close folders—open to anyone passing by. Frames holding pictures of sweethearts and children stand by as guardians for the people who are absent from their high-back swivel chairs.

Officer Raffa returns and mutters in heavy Italian brogue, “Il signore is waiting for his… avvocato difensore.” He points to the room with a closed door. “Come, Mr. Zavos. Your friends stay here.”

“Josh is in there waiting for his defense attorney. Back soon.” Alec touches my arm and looks at Bill, sending him a private message.

Alec’s led to a side office, and the solid door closes behind them.

“Is Alec signing autographs, or should I even worry about what’s going on in that room? Has Josh been here the entire time messing with evidence?” I ask Bill.

“Alec’s prepared for all contingencies. I’m surprised they haven’t taken Jennings down to the station by now.”

A few minutes later, Alec emerges by himself. “They weren’t going to allow us to talk to Josh, but I persuaded him. It shouldn’t be much longer.”

For what feels like an eternity, we sit in ladderback pine chairs with brown cushions while Alec keeps adjusting his watch. I don’t know what Alec had to promise the officer. Autographs are fine with me, but if he had to pay him off, I’d rather not know.

“I hope Brad is parked in the shade somewhere.” Alec looks at his watch for the eighth time in twenty minutes and turns to me. “Now that we’re here, they seem to be in no hurry to get rid of us. I’m sorry, Anna. Hold on a little longer.” His smile is an honest one full of regret.

I’ve heard the sentiment from him so often it doesn’t even register with my brain anymore. We both have a lot of work to do in the I-promise-to-do-better department.

The closed door at the back wall opens, and a guy pokes his head out, surveying the room. He’s fiftyish and, with his reading glasses, reminds me of Gen’s studious accountant.

A confused Josh looks at us and then the floor as if he’s embarrassed. Eventually he settles his eyes on Alec. “I wasn’t sure you’d come. My attorney should be here soon. Come back to the conference room.”

Bill asks Alec, “Is it okay to go on ahead?”

Alec must have compensated the officer well to allow us entry this close to the crime scene.

“Let’s get this over with.” Alec seems queasy.

The three of us move through the aisle between desks and toward the room with a door left open for us. Josh has already gone inside. For someone who wants Alec’s help, he sure doesn’t appear happy or grateful for his effort. A huge effort. This had better not be Josh’s way of buying himself out of the woman’s death. The disgrace of being fired from Signorile after Pearce’s tragedy has to hurt his pride.

There’s news of a deadly virus moving through Europe, and the typical handshake is no longer being used between business execs.

Bill lifts his arm and catches himself. “Mr. Jennings? My name is Bill Drake, an associate of Mr. Zavos. You’ve asked to see him, and we also have some questions for you on another matter.”

“Wonderful.” The man in a sweaty, slept-in polo isn’t thrilled with us staring him down. There’s frost in the room as testosterone flies between glances. No one wants to be the first to break the sheet of ice forming around the presumed blue-eyed killer. Alec hasn’t made any assumptions yet until we talk to him, but Josh’s cool facade feels calculated to me. A superior to Alec, or something like that. For an innocent, I don’t like his peculiar behavior in the presence of a man who’s here to keep his neck from a noose.

“I asked to see Alec. Who are the rest of you?”

He’s behind a chair, using it as a shield to save himself from a CEO who wants to take his livelihood from him again. Or is it because he’s guilty of ending a woman’s life?

Alec pulls out the chair for me, and we all sit at the long conference table with a fancy letter F embellished in the center.

Josh’s temples bead with sweat, and he’s wringing his hands next to a wool felt fedora hat with a band. They seem to be popular in Italy. The guy’s bloodshot eyes and dark circles are sure signs of insomnia and stressing to the max. Wet ovals hang beneath the armpits of his beige shirt.

Alec’s unshakable gaze lands on Jennings, who abruptly turns away.

Bill addresses Josh. “We don’t have a lot of time. Authorities aren’t thrilled with us questioning you, but they were… let’s say, swayed. Tell us what happened here?”

“She was tied and tortured in my office after I left night before last. I opened the building in the morning at seven and found her lying on her side, strapped to a chair and wrapped in wire near my desk. Lots of blood.” Josh holds a paper towel over his mouth, then uses it to wipe away perspiration. “When I left the building, she was in the conference room. I have no idea how she ended up in the office. Maybe the cat went in there.” He slides the fedora into his lap. 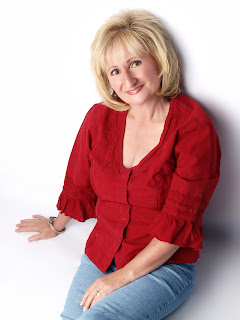 Marlene M. Bell is an award-winning writer and acclaimed artist as well as a photographer. Her sheep landscapes grace the covers of livestock magazines such as, The Shepherd, Ranch & Rural Living, and Sheep Industry News. She has a mystery series available as well as a children’s book featuring their bottle lamb, Natalie. Marlene and her husband, Gregg, reside in beautiful East Texas on a wooded ranch with their horned Dorset sheep, a large Maremma guard dog named Tia, along with Hollywood, Leo, and Squeaks, the cats that believe they rule the household—and do. 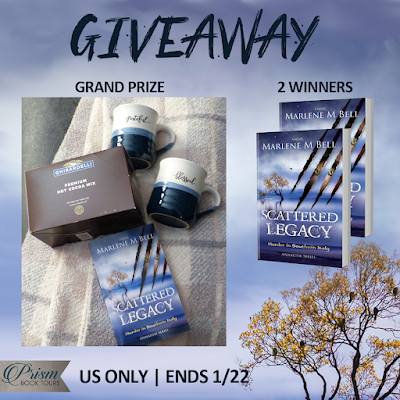