Essie would do anything for her kingdom…even marry an elf prince she just met that morning.

The human kingdom of Escarland and the elven kingdom of Tarenhiel have existed in an uneasy peace after their last wars ended with both kings dead. As tensions rise once again, desperate diplomacy might be the only way to avert war. If only negotiations between elves and humans were that simple.

When a diplomatic meeting goes horribly wrong, Essie, a human princess, finds herself married to the elf prince and warrior Laesornysh. Fitting in to the serene, quiet elf culture might be a little difficult for this talkative princess, but she’s determined to make it work.

With impending war and tenuous alliances, it will be up to Essie to unite her two peoples. And maybe get her hands on elven conditioner while she’s at it.

Getting Past the Publishing Gatekeepers by Hope Bolinger, Linda Fulkerson, Rowena Kuo, and Carrie Schmidt

Book Review: Petra and the Sewer Rats by G.J. Kemp 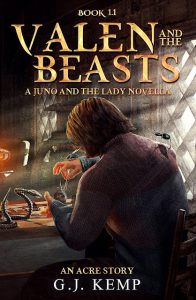 Book Review: Valen and the Beasts