Welcome to the Blog Blitz for the Bonita Creek series by June McCrary Jacobs, hosted by JustRead Publicity Tours! 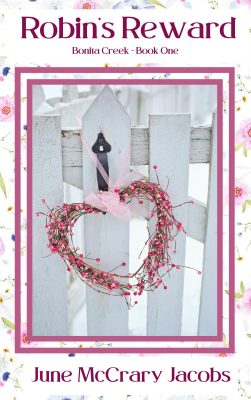 Is a relationship which began with both parties harboring secrets destined to survive?

Welcome to friendly Bonita Creek, a small town in the Coastal Mountains of the Mendocino Coast of California . . .
Bonita Creek’s librarian, Robin Bennett, is heartbroken after being abandoned by her husband, Thomas. Mysterious Jeff Clarke arrives in town unexpectedly and touches Robin’s life with his wit and warmth. Without warning, Jeff’s harsh words and abrasive actions scare her off, and Robin’s hope of finding true, long-lasting love withers again.
Can the couple move past their troubles and the obstacles in their path to find love and happiness together? Jeff and Robin must use their faith and their newly-forged bond with each other to remain strong and true. Will it be enough for them to embrace a life of love, trials, and blessings . . . together?
‘Robin’s Reward,’ Book One in the Bonita Creek Series, is a contemporary Christian romance story which is completely clean in language and content. 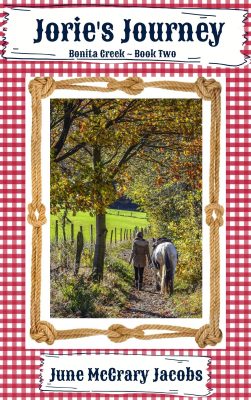 Title: Jorie’s Journey
Series: Bonita Creek #2
Author: June McCrary Jacobs
Publisher: Independently Published
Release Date: May, 2022
Genre: Christian Western Contemporary Romance
After an idyllic life scarred by a traumatic event, is Jorie Woodstone ready to move forward to share her life’s journey with a man who loves her unconditionally?
Welcome back to friendly Bonita Creek, a small town in the Coastal Mountains of the Mendocino Coast of California . . .
Jorie Woodstone is the owner and operator of the wildly successful Cowgirl Bakery in Old Town Bonita Creek. She appears to have it all. She is musically gifted and belongs to a warm, loving, supportive family; but she’s built a brick fortress around her heart after being traumatized by an acquaintance in an unforgettable event three years earlier.
Join this talented, spirited cowgirl as she journeys on through life’s joys and sorrows with faith, strength, courage, and love on the road to true happiness.
‘Jorie’s Journey,’ Book Two in the Bonita Creek Series, is a contemporary Christian Western romance story which is completely clean in language and content. 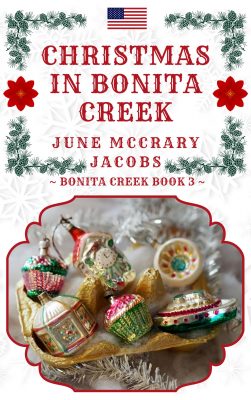 After seeing more than two years of combat in the Korean War, will the homecoming of two men from Bonita Creek be filled with the joy and romance they are yearning for or will it bring them even more heartache?

It’s late summer, 1952, in friendly Bonita Creek, a small town in the Coastal Mountains of the Mendocino Coast of California . . .
Estelle Vincent is missing her older brother, Sam, and her fiancé, John Chaplin, who are far away fighting for the US Army in the Korean War. They’ve been gone for more than two long years, and she is feeling out of sorts.
When she has a frank discussion with her mother, Estelle realizes that she is not the only one who has been moody and bored with her uneventful life. Her mother’s words inspire Estelle and catapult her into action organizing a community holiday project for the children and teens whose parents work for Mountainside Ranch outside of town.
As the story deepens, Estelle learns that several people close to her are harboring secrets—including her mother, her brother, and her best friend. She learns to be flexible and understanding as she looks outside of her own life and examines the impact of unforeseen events on those closest to her heart.
Join this intelligent, strong-willed hometown young woman as she navigates the obstacles and challenges of life with hope, perseverance, faith, courage, and love on her road to a brighter future filled with dreams come true.
‘Christmas in Bonita Creek,’ Book Three in the Bonita Creek Series, is a historical Christian holiday romance story which is completely clean in language and content.

“I brought out some freshly-baked muffins and a bowl of strawberries I picked from my garden this morning. Would you like a snack with your tea?”

“Help yourself. I’d like to say grace before we start to eat,” she said. He nodded as he bowed his head.

When she murmured amen, he said, “My family always said grace before a meal when I was growing up. I guess I’ve gotten out of the habit, being a bachelor. I eat most of my meals alone. Not a good excuse for not expressing my gratitude, I know.”

Robin was touched by his candor and hesitated before lifting her eyes to meet his gaze. So, he’s not married.

As they each loaded food onto their plates, Jeff spoke. “I figured out on my walk that I live on the next block over in that direction.” He pointed toward the back of Robin’s property.  “In fact, I think I may live directly behind you.”

“I’ll say. You have a beautiful garden out here.” He waved a hand toward her front yard. “It’s full of all sorts of flowers and shrubs. It looks as if your lot is deep on the back side of the cottage. What do you grow back there?”

Robin sat back in her chair and realized after a rough start, she was slowly beginning to relax. She loved talking about her gardens to whoever would listen.

“I grow strawberries, carrots, lettuce, tomatoes, cucumbers, watermelon, and some green beans. Later on in June, I’ll plant a small pumpkin patch with some other types of squash and gourds, too, so they’ll be ripe and ready by October.”

She took a couple of sips of her iced tea and continued, “I have some berry bushes and a few small citrus trees. I love to take flowers to the church for the altar and to give to my friends and extended family, so I have a large cutting garden with Shasta daisies, Gerbera daisies, sunflowers, coneflowers, roses of all colors and sizes, peonies, irises, and gladioluses.”

After popping a juicy strawberry into her mouth she continued, “I have a section by the fence that runs pretty natural with wildflowers such as California golden poppies, bachelor’s buttons, blue and white lupine, and nasturtiums. My favorite summer flowers are dahlias. I have a bed way in the back where I try to plant a different variety of dahlia each year, but my collection is still rather small.”

Robin stopped short and looked directly at her guest. “Are you tired of hearing about my gardens yet?”

“Absolutely not; go on.”

The genuine warmth she felt in his smile made her heart skip another beat. She ate a few more strawberries and continued, “I have a section in back that gets a lot of sun, so I filled it with lavender, cacti, succulents, and rocks.”

“Excuse the interruption, but don’t the rocks require a lot of water? I’ve heard California is constantly in a state of worry about drought.” 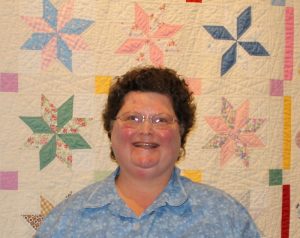 June McCrary Jacobs‘s debut novella, ‘A Holiday Miracle in Apple Blossom‘, was the winner of Cedar Fort Publishing’s 2013 Holiday Tale Contest. ‘Robin’s Reward‘, a Christian contemporary romance, is set in the Mendocino coastal region of California. It is Book One in the ‘Bonita Creek Series‘ and was originally released in 2015; the second edition of the book was released in July, 2022. The second book in the series, ‘Jorie’s Journey‘, was released in late May of 2022. The third book in the series a Christian historical romance, ‘Christmas in Bonita Creek‘, was released in December, 2022. ‘Romance By Proxy‘ is a later-in-life clean, wholesome romance set in Humboldt County on the Northern Coast of San Francisco which was released in August, 2021. June’s Christian historical romance short story, ‘Handmade Hearts‘, was inspired by the true story of how June’s aunt and uncle met in New Orleans during World War II and was released in December, 2018. June’s debut middle-grade novel, ‘RES-Q Tyler Stop‘, a historical novel set in Sonoma County, California, in 1968, was released in the spring of 2019. In early 2022 she published two short story collections for children entitled, ‘Carter’s Cookies & More Family Stories for Children‘ and ‘Banjo & More Pet Stories for Children‘. As a retired elementary school teacher and literacy mentor, June finds writing for children to be a rewarding and challenging experience.

Connect with June by visiting authorjunemccraryjacobs.blogspot.com to follow her on social media or subscribe to email newsletter updates. 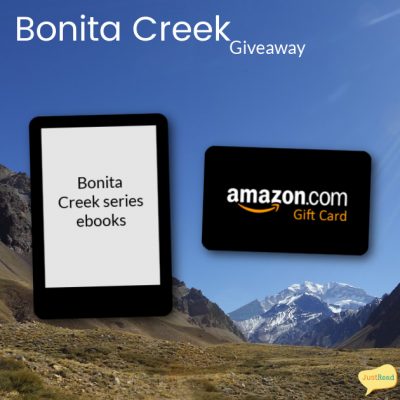 Full tour schedule linked below. The giveaway begins at midnight January 18, 2023 and will last through 11:59 PM EST on January 25, 2023. Winner will be notified within 2 weeks of close of the giveaway and given 48 hours to respond or risk forfeiture of prize. US/CAN only. Void where prohibited by law or logistics.